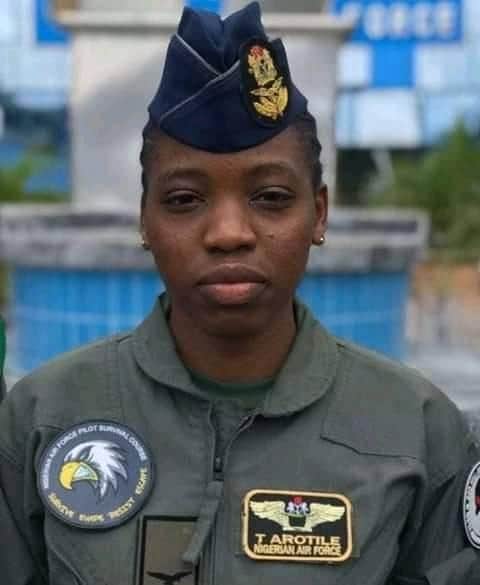 (One Death Too Many)

Before the global pandemic, we were not short of incidents of people dying in various circumstances, but the cloud of despair now is such that death from COVID-19 and many difficult to explain situations leaves one confused.

Like I noted in my recent piece titled: Bind the spirit of fear, the choke of Coronavirus can indeed be suffocating with the rate at which people are announced dead. As it is, it’s as if we are all waiting for who goes next in whatever way.

I have been too shocked by the circumstance of the death of Tolulope Arotile, Nigeria’s first female combatant pilot that I have not been able to write anything about it.

I keep staring at one of her most used picture in which she was standing in front of a fighter jet with hands akimbo.

It seems to have a message which the picture was not intended for. “ I have run my race and I got to fly off” Maybe if she died in one of the air raids of the insurgents camps, it would be easy to comprehend her death, but a freak accident within the Air force Barrack or what? Really puzzling how death could sneak in on us.

There are speculations that there could be more to her death, but whatever the truth is, she has joined the list of one death too many at this time, considering her age and what she represents in the annals of accomplishments in our country.

Our hearts are with the family with  as they bore this grief more than any of us. Devastated, like the father said in an interview is an understatement, only God can grant him, wife and children the fortitude to bear the irreparable loss.

Talking of countless sudden deaths of the season, I remember a colleague, Aramide Oikelome, former Religion Editor of Daily Independent Newspaper who passed on along with some other journalists.

Aramide’s death happened the week I had included her name on the list of participants for a stakeholders meeting on an issue I knew she would be too glad to make some valuable contributions.

Being the founder of an organization that caters for children and widows, she was a perfect fit to discuss about Managing Internal Displacement in Nigeria with regards to the plight of Internally Displaced Persons ( IDPs), but alas, she turned out to be a victim of the lack of enough attention for other sick persons apart from COVID-19 patients.

Apart from other engagements, we have attended two international media programmes in the United States. That was how close we were in her lifetime.

Instead of mourning her passage, I chose to celebrate her in a Facebook post for the good life she lived and impact she made.

“I wish I could cry, but I won’t. I would rather remember the joy of the Lord you radiated in your lifetime. I will tell the world how you cared about humanity and sacrificed all you had to make the world a better place.

“I will tell of the outstanding journalist you were and how you brought succour to many you met and could reach in your earthly journey.

I will thank God for enabling you to fulfill your purpose and being a faithful daughter of Zion and mother to the motherless.Sleep well my dear sister Aramide Praise Oikelome.”