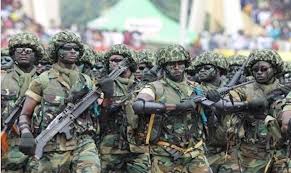 Asymmetric warfare requires tact, innovation, creativity and resilience. It requires profound forsight, dynamic, purposeful and courageous leadership which the Nigerian Army (NA) and indeed the nation are lucky to find in Gen Buratai especially at this critical period of our existence as a nation.

It is obvious, the Chief of Army Staff (COAS) is aware of this and has therefore initiated, organized and deployed several new innovations in tackling contemporary security threats including terrorism and banditry activities in Nigeria.

The introduction of Super Camp as a war strategy by the COAS is proving to be very effective and rewarding despite the initial apprehension or criticisms from some individuals and groups who have little or no knowledge of the Military’s war tactics and strategies.

This point was corroborated by the Chief of Defence Staff (CDS), Gen Abayomi Gabriel Olonisakin while on operational visit to Nigerian Army (NA)  Super Camp 4 Faskari in katsina State on the 13 of July 2020 to assess the level of preparedness and performance in respect of Exercise Sahel Sanity in Faskari Katsina State. From Super Camp 4 Faskari the operation is planned in such a manner that the troops can project force to cover contiguous states of kaduna, kebbi, Niger, Sokoto and Zamfara to flush out bandits hibernating in the areas.

The CDS used the opportunity to commend the COAS for his initiative, organization and resilience in combating insurgency and banditry activities and to the entire officers and men of the NA for their gallantry. All this couldn’t have been achieved without the profound support of the President and Commander in Chief of The Armed Forces, President Muhammadu Buhari.

While at the super camp 4 Faskari, the CDS expressed satisfaction with the initiative, dedication and successes achieved so far and pledge the total support of the Defence Headquarters to the NA in its bid to flush out criminals and marauders in the North West.

According to the CDS, “all  necessary support and assistance required to enable the NA achieve the objectives of the exercise will be provided by the Defence Headquarters.

The Super Camp war strategy introduced by the army leadership which ensures flexibility and concentration of forces and resources should be reinforced/complemented by blocking forces  in the contigious states of Kaduna, Kebbi, Niger, Sokoto and Zamfara. This is to deny the criminals ease of action and movement. This also requires the collaboration and cooperation of sister security agencies to effectively implement.

The results of this initiative is evident in most communities in North west as farmers have resumed their farming activities and people who have fled their homes have already started returning to their normal lives. The NA must work hard to sustain these efforts and laudable achievements until banditry becomes a thing of the past.

It is however, very unfortunate that while operations are taking place concurently in the North East and North West with appreciable level of successes, some so called social commentators and analysts have subjected the uncommon performances of the army under Lt Gen Tukur Yusuf Buratai to mere ill feelings, bad belly, sheer sentiments or pedestrian debates.

Some self acclaimed security experts based their judgements on the number of bombs thrown, or bullets fired or the numbers of casualties without proper situation awareness of the battlefield. While for others, it is how they are personally affected or their business concern is affected that determine the army’s response to insecurity. Some have even arrogated themselves the discretion to ascribe or determine the tenures of service chiefs. All these have either created tension, emboldened the criminals, exacerbated insecurity or clogged the wheels of progress towards securing Nigeria, and it is the opinion of this writer that there is need for a rethink on the part of these kind of selfless, oftentimes mischievous individuals and groups.

Observers should closely study records and history of the NA and will find out rightly that as a war time COAS, Gen Buratai actually leads from the front in all the theatres of operation where he coordinates both office and field activities. There is indeed no doubt that he is the most workholic, stressful, committed, selfless and resourceful COAS ever produced by the NA. As a war time COAS, he still emerged as the most accomplished leader of modern day NA. His accomplishments in the operational arenas, human capacity development, equipment disposition – war armaments,  logistics, military kits, welfare and infrastructural development are unparallel in the history of the NA. Hence, despite all distractions or ill motivated criticisms, history will judge Gen TY Buratai positively. He has so far already written his name in gold in the history of our country and in the annals of NA history.

The tenure of the current army chief will surely go down in history as one who has fundamentally transformed the NA with positive impacts on security, national cohesion, unity and development.

Buhari & Successorship: I ve no Plans for 2023 Presidency – Osinbajo