NASS explains why Kalu’s seat was not declared vacant 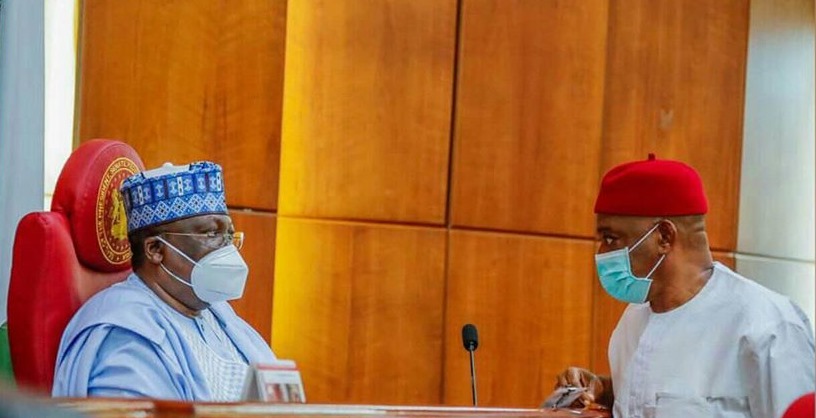 The Senate President, Ahmad Lawan on Tuesday offered an explanation on why the upper legislative chamber refused to yield to pressure to declare Senator Orji Uzor Kalu’s seat vacant during the period of his incarceration. Lawan, according to a statement signed by his Special Adviser on Media and Publicity, Ola Awoniyi, gave the explanation on Tuesday when leaders of thought from Abia State, paid him a courtesy visit. He said what the Senate did by preserving Kalu’s seat and his position was not extra-ordinary but the right and just thing to do.

“There was no way anybody could convince us in the Senate that somebody should take the Abia North Seat because it wasn’t vacant. “He (Kalu) was on several appeals and until he exhausted all the opportunities available to him, that seat remained his seat. “Similarly the position of the Chief Whip, we didn’t even appoint an acting Chief Whip. The Deputy Chief Whip continued to play that role until he was released. “We came under pressure, of course. But we thought the right thing to do was to keep that seat, that position until he was able to get his judgement.”

The delegation of the leaders of thought on Tuesday was at the National Assembly in Abuja to appreciate the Senate and its leadership for showing their concerns for Kalu during his incarceration. Recall that the Senate Chief Whip was sentenced to 12 years imprisonment in December 2019 for fraud allegedly committed while he was Abia State Governor between 1999 and 2007. Kalu spent six months in the correctional facility before he eventually regained his freedom and returned to the Senate following the Supreme Court’s judgement which nullified his conviction on grounds of lack of jurisdiction by the trial judge.

2023 & Successorship: ‘Forget the pretence, APC will swim and sink on Tinubu (I)’ – Iliyasu Gadu

2023 & Successorship: 'Forget the pretence, APC will swim and sink on Tinubu (I)' - Iliyasu Gadu